So every year I list the Christmas presents I received, so that I can keep track of when I received what, which is helpful when something breaks or no longer wants to work. (Which doesn't happen often, but even so!)

This year, I had a hard time with my Christmas list, but I ended up receiving a replacement pan set from King Arthur Flour (13 x 9" pan, two bread pans, and a half cookie sheet) so that I can replace some of my ancient aluminum baking pans, a digital scale for my kitchen (which has already proven useful!), a Jam and Jellies book and one with 500 soup recipes (and also a book on fermentation and the Perennial Vegetable book I wanted), a Rookwood mug, an antique yarnwinder and a miniature antique clock, and all sorts of other things, including pajama bottoms so that I can replace some of mine that are falling apart. All in all, it was a very nice Christmas!

I have already made raspberry jam from the book, although I did not can it, I will freeze one container and eat the other one. I was out of jelly/jam anyway, and it's getting more expensive to buy, so I'm going to experiment with some jams and jellies with the fruit I have in the freezer. Since my breakfast every morning is peanut butter and jelly toast, this will save me some money, definitely! (And use up some fruit!)

I bought myself a set of Denise Knitting Needles for Christmas--I have been knitting more often, and my circular knitting needles are stiff and inflexible and a pain to use. I've used the Denise ones before (and sold them each time when I had to pare down) but this time, I think I might keep them around. They have already proven useful. Since I plan to knit more often, they will probably stay.

The yarnwinder I received for Christmas was one that I saw at a local online auction and had Dad bid on for me. He said that it went too high for my budget, and I couldn't see the archived auction, so I dismissed it from my mind... until he took me up to Storage yesterday and it was there. :) 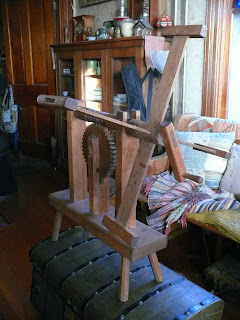 Otherwise, everyone seemed to like their gifts--Elsa and Chase especially had a nice time. But it was a long day, so I was very glad that I had taken off today.

I've spent today not doing a lot; I put away my clothes and sorted through sweaters and shirts, baked a loaf of Oatmeal Sunflower Seed bread, and made raspberry jam. I guess that's enough, hmm? Right now, I'm writing, because I didn't get a lot written yesterday.

It's almost New Year's, which means the purported end of the Year of Completion. I have a lot to say on that subject, but that will be written a bit later...