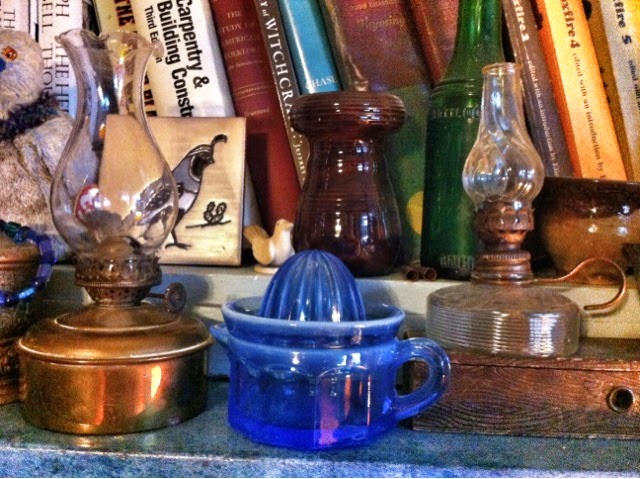 The two little oil lamps and the blue juicer/reamer were some of my finds this month.
The first Burlington was today; a week early since Easter is next week. I brought a decent amount of stuff and sold a bunch of stuff--although no rolling pins, surprisingly. I might lower the price a bit next month.
I bought... Not a lot, really, although I spent about $100 total. A Celtic calligraphy book that looks like fun, two Louisville pottery mugs, a box of woodcarving tools, a cherry box someone made, a blue glass juicer that came with its own cup, four long strands of beads, a candle sniffer, two small oil lamps, a medium sized Pyrex bowl, a really nice shelf... Nothing was expensive, and I stayed within my budget, so it's all good.
But it got up to 80 degrees today, and whew! It was a bit hot I don't remember the April Burlington ever being this warm.
Of course, there's a chance of snow Tuesday morning, so there's spring in Ohio for you...
Thankfully, the pizza is back, too. :)
Email Post