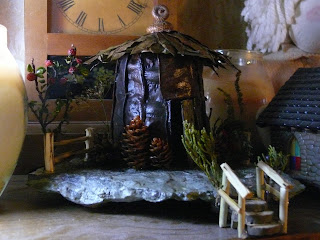 So Christmas was very nice; we got done unwrapping presents in record time, so although I didn't get home until after 9:30pm, we were not at Mom and Dad's house until 10pm as I predicted. :) We had a lot of great food to eat (too much food, really, but hey, not complaining!) and I think Elsa, Chase, and Ethan had a good time along with everyone else.

So anyway, this was the Christmas of Interesting Gifts. My Mom and Dad bought me the fairy house you see above--and I have a friend on Ravelry who made a woodland scene display for Christmas that this will fit in to quite nicely for one of my own for next year (she even crocheted the trees!)--it's made out of honey locust seed pods and redbud seed pods, among other things. Very, very cool.

At the November craft show, one of the crafters approached me with a cedar Native American Style flute they wanted to sell; I would have bought it, but I was low on spending money, so I didn't buy it. Well, Mom bought it for me. I was very surprised! (And happy!) So that was cool. I've always wanted to play one of those, and this one has great tone. Dad found me a pottery (black clay; I forget what it's called) ocarina shaped like a rather angry bird, too.

I received a new stereo--with a CD player--that is about 1/4 the size of my old one. The top of the organ in the living room looks quite empty now! And it sounds good, too. Now I can belatedly play my Christmas music (other than on my computer) and won't have to worry about old equipment breaking down.

My sister Emily got me a "EAT MORE KALE" t-shirt, which I thought was hilariously appropriate, considering how well kale grows in my garden. She also got me a pair of winter boots (I picked them out) that should be very helpful this season. They are waterproof and insulated and although I haven't tried them on yet, I'm sure they will fit, because I have another pair of boots from that brand, and they fit fine. In fact, I'm planning to wear them out today, since it's raining and sleeting and basically not-so-nice outside.

I received books from my wishlist-- The Barefoot Architect, The Beginner's Handbook of Woodcarving, and Mini-Farming: Self-Sufficiency on 1/4 Acre--along with a chip carving knife set and a finger guard so I don't try to cut off the tip of my finger again. :) I have a lot of building/carving/stuff on my list of things to do, so this will help me get to the point where I can actually do this sort of thing.

I asked for, and received, some nice wool socks from Bekah, along with yummy cookies she baked (and one of the books), and some bath & body stuff as well... in fact, I'm good for hand soap for a while, thanks to both Bekah and Mom! :) Jess and Rick got me one of the books as well, along with some organic green tea and some Endangered Species Chocolate (Yum!) I also got a zip up lined sweatshirt jacket--it's very nice and comfortable--and a pretty purple skirt to wear in the summertime and some other clothes as well.

And there was more, of course, including gift cards (which are always nice!) but again, this is getting long and I have stuff to do this morning that does not involve sitting in front of a computer. So I hope everyone who reads this had a Merry Christmas (if you celebrate; if not, then I wish you a Happy whatever-you-celebrate) and I'm looking forward to the New Year.
Email Post