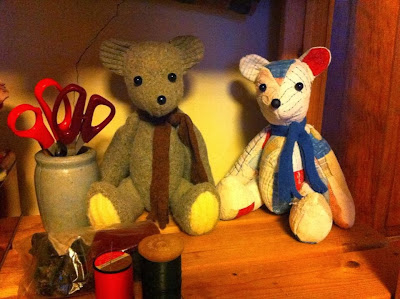 Before, in October and early November, and sometimes September, even, I would prepare for the craft shows that I set up at every year. I would cut fabric, sew, string beads, stuff, name dolls and bears, crochet, and later, weave; spin yarn, and manage a couple of new things as well, depending on my creativity at that time.

Every year I pledged to start earlier, so that I was not so rushed at the end of the crafting time; every year I failed in that pledge.

There were various reasons for that. In summer, crafting upstairs is not very pleasant; the upstairs bedrooms are usually hot and sometimes miserable. In summer, also, is the garden, and some days it takes every scrap of "spare" time I have just to harvest and/or process what my garden has grown, since I have a full-time job and a long commute.

Before, my commute was long, but not that terrible. Now, I work an hour and twenty minutes from my house. That's over three hours a day stolen from the time I have to do what I want/need/have to do around my house--including crafting.

Since I also write books, and to write books, I have to actually write, and very nearly every day, my time for crafting during the week is extremely limited. This week, I decided on Tuesday that I would attempt to make another bear (because I have been crafting, a little; on the weekends) during the week. It took four days to finish with everything else I do at home. Normally, they take about 3.5 hours from start to completion.

I realize that. I'm working on that. It's a slow process, because to be able to support myself and my household with alternate income, I first have to get to the point where I can live on at least half my current salary, which means no consumer debt. (I'm not counting my mortgage in this.)

If the office hadn't closed and moved downtown, I would be at that point already. It costs me--out of pocket--$5,000/year to work downtown. This includes gas (so the price tag is a little flexible, but not by much; my calculation is with gas costing $3.50/gallon), city taxes, parking, and extra wear and tear on my car. So far, with our third year beginning in March, I'll have spent $15,000 out of my own pocket just for the dubious non-pleasure of working downtown.

My current consumer debt is right around $4,000. That's down from over $30,000 in 2010, so while I've made great strides, I'm not quite there yet. I had hoped to have everything paid off by the end of this year, but right now, it looks like February or March. Considering the office moved in March, I'd say that would be a good goal.

This year has been the Year of Completion. I know I haven't mentioned it much or very often, but I've been working at it, with various stops and starts, all year long. I have learned a lot about myself this year. I've gotten rid of a lot of baggage, both in actual physical stuff and also other, non-physical stuff. I've decided things, and put a few decisions away for later.

I'm not even close to declaring "I'm done!" yet. In fact, I'm not sure this is something that can be declared completed at all. I think the Year of Completion has taught me that life is an ongoing process (not that I didn't know that before; I did, but sometimes, you lose track of such things.) Sometimes it's not as clean as you'd like, or as chaotic, or as calm.

Right now, my life really has no place for what I love to do. The time I spend at work or commuting eats up so much of my day that sometimes all I want to do when I get home is fall asleep. But I don't, at least not always. I write, I craft, I bake, I cook, I clean, I read. Sometimes, I go to auctions or antique shows and buy old stuff*. Sometimes, that stuff stays, to be used in my house or in my life. Sometimes, I resell it, always at a profit, however small.

Mainly, I give myself permission to slow my life down to where it should be, instead of where it actually is.

In less than two months, we'll be welcoming in another year.

I'm making a pledge for next year already.

Next year will be the Year of Freedom.


*I went an auction last Sunday; the first time all year I've been to an auction. I bought 78 rolling pins. Before you laugh or wonder if I've lost my mind, the price per rolling pin I paid will make it very easy to (at the very least) double my money. Essentially, I have about $1000 of rolling pins in my house right now. They are mostly for Burlington next year, although I've already sold five. (Three to Mom and Dad, at cost.)
Email Post

Grey Walker said…
I am rooting for you, and praying that your work situation changes, SOON, into something more sustainable. Year of Freedom, ahoy!
4:55 PM