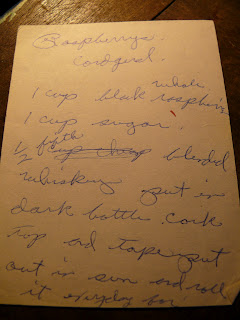 There's just something about a handwritten recipe that intrigues me; it's partly because someone wanted a particular recipe enough to write it down and because it's almost like decoding an old handwritten document sometimes due to creative spelling.

Today, I went to an auction, mostly for Dad, since he was unable to go. But there were cookbooks at the auction, and I came home with three boxes of them. I also came home with two boxes full of handwritten recipes and recipes the previous owner cut out of the newspapers--and the boxes are full.

The recipe for Raspberrys Cordgeral was in the first small stack I removed. (The previous owner must have smoked, because they rather reek, but airing out will do them good.) 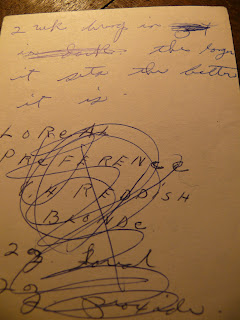 Put in dark bottles, cork top and tape. Put out in sun and roll it every day for 2 weeks. Bring in. The longer it sits the better it is.

These recipes are written on the backs of receipts, of advertisements, of scraps of paper used before for something else. There are household hints, as well. The dates I've discovered so far range from the 1950s through the 1970s, and that's only a small amount so far.

It's going to be quite fun to go through all of these and see what I have. I'll post updates as time allows.