Skip to main content
September 17, 2012
So the second-to-last Burlington was yesterday, and I came home with a Frankoma brown teapot (which is actually very similar to Celeste's teapot in A Glint of Silver (which is the title of the combination), what I think is an olive wood cutting board (a nice medium sized one), and a small basket. Oh, and I did buy a Willcox & Gibbs sewing machine--just the sewing machine part--to resell on ebay once I work on it a bit.

I sold some stuff, but not a lot, but I can't really complain, since it's all more stuff out of my house. :)

So today has been my resting day, and I've spent the morning plying my lovely olive green Romney that has been in a plying ball for over a year. It's going pretty quickly, actually--what would have taken me months not that long ago goes very quickly nowadays!

This is after three and a half episodes of Primeval: 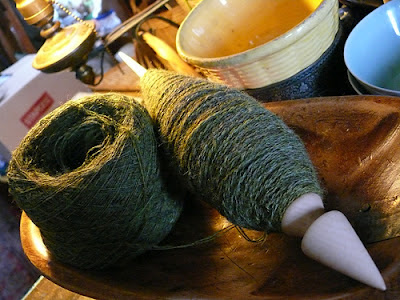 And it's actually larger than that now. I hesitate to say this, because I really didn't intend to ply all day, but I could probably get it done today if I wanted to. We'll see, though. I have other stuff to do as well.

The card reader that I plug into my computer (for my camera's SD card) died this weekend. Luckily, they are cheap to replace, but until then, I have to upload photos using my netbook, which is OK, but not ideal at the moment. So there won't be many photos for the next couple of days.
Email Post