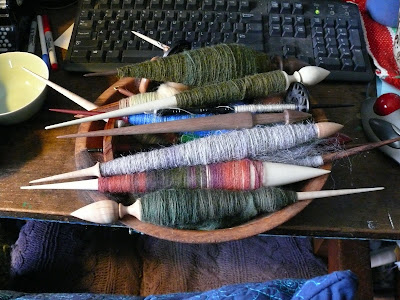 I gathered up all of my spindles yesterday, spread them out on the dining room table, separated my absolute favorites, and chose seven more for destash because I have too many of them.

It's not that the ones I chose for destash weren't great spindles; they are. There were some duplicates, and others I used and then put away, for one reason or another. There are still a couple I might destash later (I'm doing the postings in stages, on Ravelry, so if you are on Ravelry, check out the Destash thread on the Spindle Candy group) but I'm happy with the amount I have right now. There are still too many, but it's a manageable amount. :)
Email Post
Labels: spindles spinning

Grey Walker said…
They're beautiful, all in a pile like that.
12:29 PM