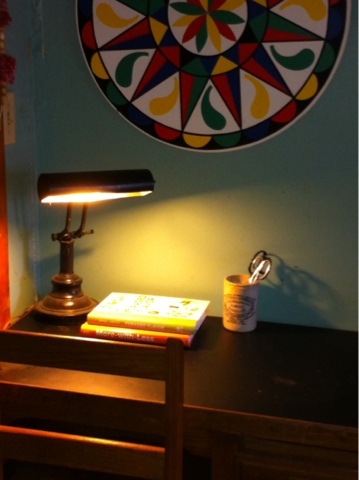 For a while now, I've been kicking around the idea of a more minimalist household. While I've made the attempt before to declutter and rearrange and make things work around here, things (stuff) invariably piles up and piles up until you can't tell I did anything at all, much less actually have my house clean enough for guests or unexpected drop-ins (not that there are many of those, but you never know.)
Anyway, and kind of regardless of that, I've been kicking around the idea for a while now. I've passed up buying stuff-- I haven't gone to a single auction all year--and I pretty much stopped reading the groups on Ravelry that were overly enabling. I've bought stuff at Burlington, of course, but that's really about it.
Truth be told, living in a house with eight cats means a constant battle against cat hair--if I cared enough to battle, that is. I've been busy with the garden and the roof, but now that the latter is done (except for cleanup) and the former is coming along, I really need to concentrate on inside.
Quite frankly, my house needs to be less cluttered so that it's easier for me to clean up after eight cats.
With that in mind, I'll be culling my possessions even more than before, and perhaps, when the Year of Completion is over and done with, I'll actually have something more than"just" a new kitchen roof to show for it.
Email Post