Skip to main content
May 19, 2013
So... in the back of my mind, I'll admit that I went to Burlington today specifically looking for a hand-crank Singer sewing machine. For under $100. I thought I was safe, because the only other one I've ever seen at Burlington had a price tag of $275. 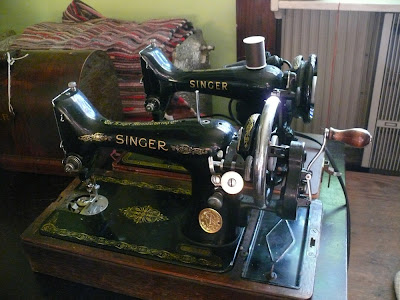 The nice thing is that they all take the same bobbins, of which I have plenty. The extra nice thing is, it's non-electric, and not so heavy that I can't be portable with it, either.

It needs a bobbin plate, which I bought from Ebay for less than $10, and it didn't come with a key, which I had already from the 1918 Singer 99k. So... yeah. Sometimes Lady Serendipity grants wishes, even though they aren't spoken aloud.

I did buy a couple of other things. A tenor recorder made in Germany, which I haven't been able to find anything out about online, two crocks for Dundee Marmalade, and a set of Tappan salt and pepper shakers, which originally came with my stove. :) But the sewing machine was the highlight of the day!

The even nicer thing about this is that I sold the 1820 spinning wheel, the Pfaltzgraff canister set, and the quilt I brought, plus a lot of $2 items, so I'm actually still out ahead. Which is good!