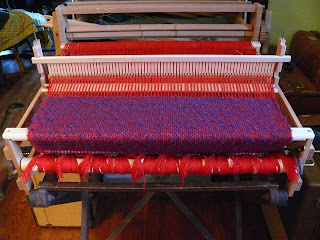 LeClerc Bergere Loom Review
When I was first looking for a rigid heddle loom to buy, I would have loved to find a place for reviews. Unfortunately, I couldn't find much at all on the internet about these looms--as in, information from actual owners vs. places to buy them. I did find one blog post, and there are a couple of people (or so) on Ravelry who have one, but there really isn't all that much information out there.

But I actually never intended to get a Bergere loom at all. So bear with me while I add a bit of background...

Back in early May, I purchased a Union #36 floor loom at an auction. Little did I know that I would soon be on a slippery slope of loom acquisition, but I knew that if I decided to keep the floor loom, I would probably want to buy a small portable-type loom as well.

By the end of May, I had purchased a 12" Ashford Knitters Loom (I'll post a review on that one later) and was contemplating actually buying another, larger rigid heddle loom as well. And I did order a 25" Schacht Rigid Heddle Loom, because I liked the look of the table clamp setup to hold the loom into place.

Only, what I got was a 25" Schacht Flip loom, which I decided to keep, then decided I didn't really need such a big loom without a stand, and then sold it on Craiglist.

With that money, I turned around and ordered another 25" Schacht Rigid Heddle Loom, only to find out from the place I ordered it from that there would be a 2 month delay, and would I perhaps want a LeClerc Bergere loom instead?

(Obviously, I am not meant to have a 25" Schacht Rigid Heddle Loom.)

So that's when I went in search of opinions on it, finding not much at all, but I figured that since the heddles are reasonably priced, why not? And I got it in the mail a few days later.

Initially, after putting it together, I wasn't sure I would like it at all. And therein lies my one issue with these looms: They work so much better on a stand, and there are no stands for them available. I think LeClerc would probably sell quite a few more of these if they made a stand available. Even a folding stand like the one I found for it would work.

At first glance the loom isn't much to look at. It's not pretty like some of the other looms I've seen. It's pretty basic and plain. I actually set it aside for almost two weeks while I worked on my Knitters Loom and tried to decide if I really wanted it, since in between that time, I ended up with a Glimakra 4 shaft table loom as well.

But then I found a folding antique loom stand (I am guessing at its original use, but it was definitely something sewing-related) at an antique show, and it fit almost perfectly. So last weekend, I decided that since I had it, I might as well warp it.

I'm of the mind that if you're going to warp a loom, you might as well go ahead and warp the entire loom. Making one small scarf as my first project just wasn't going to work for me. So I found a cone of red acrylic yarn, and the huge cone of mohair blend yarn with sparkly fuschia bits, and warped the loom in red (see above picture.) I was listening to "Speaking of Faith" on NPR as I warped--they had a piece on Voodoo, which was very interesting. And, to warp the entire loom only took 50 minutes. Less than an hour! That's impressive.

I warped on enough for a shawl, then sat on my higher stool and started weaving. Since the stand isn't made explicitly for the loom, there's a small bit of adjustment, but it's really not anything worth mentioning.

I was worried initially that the heddle would be too awkward to handle, but it's actually quite comfortable. And my other concern was the shuttle; I hadn't used one that long yet, so I wasn't sure how it would feel. I am pleased to say that I'm having no trouble at all with either piece. In fact, weaving on this loom goes just as quickly as the Knitters Loom does. I am impressed.

So far, I'm having no issues with tension or with my yarn; the only issue I'm having is with my cats, who did jump on the loom the first day and almost ruined everything. Thankfully, I was able to get all the messed up yarn back in order.

My other complaint are the metal pieces at the top of the loom. I have snagged my sleeve and/or my self on them quite a few times already. Since I have since purchased an older model of the same loom with a wooden piece across the top, I am wondering why they discontinued the wooden piece across the top? It would make a lot more sense to have it in place vs. a careless stabbing if I'm not cautious. What I will probably end up doing is gluing some flat beads or something to the spikes to make them less 'spike-like'.

After a week's worth of weaving (in bits and pieces of my spare time), I finished my first shawl: 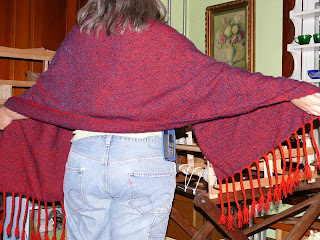 It turned out beautifully.

So, my review in a nutshell:

Pros: Price ($165 for a 24" weaving width), setup, ease of use, reasonably priced extra heddles (the metal ones are expensive, though)

Cons: No stand, really sits too high to use at a table, not very 'pretty', what's with the metal spikes?

Overall: I think this is a good deal if you can find a stand for it. You may be able to make one; it's not an impossible task, or find a table bottom with no top that would fit it perfectly. I can even stand up at my stand and use it comfortably if I wish.

I will be using this one quite often.
Email Post
Labels: bergere leclerc bergere loom loom reviews looms reviews weaving

deirdre said…
Thanks so much for your review! I purchased one of these, and have tried twice to warp it without success - but you've inspired me to give it another go today - may I ask what you did with the ends at the back? Do you just tie them around the bar or is there something else?(sorry - lack of technical jargon - I'm very, very new to this)...
7:14 AM

Jennifer said…
I am probably warping a different way than you are--I'm direct warping vs. using a warping board. The initial directions that came with the loom weren't all that great. :)

The best direct-warping directions I've seen are on the Ashford Knitters Loom website--they have a little movie you can watch. (I just finally purchased a warping board and haven't used it yet.) Their website is www.knittersloom.com and it's basically the instruction book, page by page. Let me know if that helps!
8:09 AM