Skip to main content
Labels
August 12, 2008
So last night, I saw a post on my local Craigslist for "Weaving Supplies" and I just about did not get to 50k on Fire and Water because of it (although I did, eventually.) I clicked on the link and saw a few pictures of interesting things, like a standing inkle loom, a warping board, a spinning wheel, and a table loom not unlike my LeClerc Bergere. Only, the seller wanted a "Best Offer."

I hate it when people do that, because I never know if I'm giving a really lowball offer or if they are screaming joyously that I gave them twice what they wanted. So I asked the seller if she had an idea of what she would want for it all--including, Jenny, a ball winder!--and she wrote back to say that everything in the pictures could be mine for $275, which is actually less than what I intended to offer her.

I asked her first where she was located--she replied that she was ten minutes away from where I work. It was fate, I tell you. Fate! 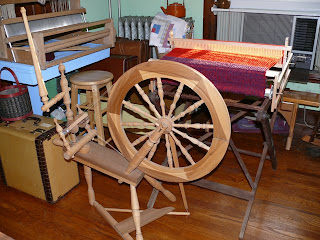 Meet my spinning wheel. She is a "Country Craftsman" spinning wheel, which evidentally is a really good (and unfortunately discontinued) brand. All in great shape; looks absolutely brand new.

I had every intention of reselling the spinning wheel, but now I am thinking. What would it hurt to at least (since I have a spinning wheel) learn to spin? And then if I decide it's not for me, I can always sell her to someone who would appreciate her more.

I think she is beautiful, though. A bit dusty, but beautiful. A standing inkle loom, with what looks to be an antique inkle loom shuttle included. It's a very nice loom; handmade and solid cherry. I will have to dust this off a bit, too. 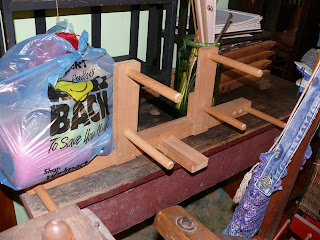 An oak inkle loom. She basically tossed this in with a bunch of weaving books and my total was $300 for everything. I bought the ball winder for $20 and forgot to take a picture of it. But it's a blue royal ball winder. 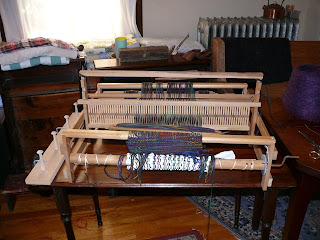 The table rigid heddle loom. It's definitely a LeClerc Bergere--it's identical to mine, except for the bar on top and an extra reed rest. The gears are marked LeClerc, but I can't find any other markings on it. I really kind of like this one better, so when I'm done with my gypsy shawl, I'll probably post the other one for sale and keep this one. 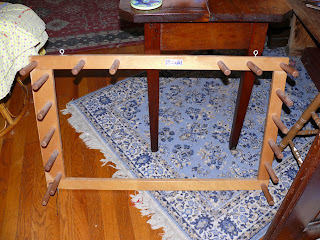 And a Hammett's warping board. This will be very useful. I've been looking at them on ebay, but the shipping costs aren't cheap!

And then, because it was getting dark, I ran out into the garden and picked 5 1/2lbs of tomatoes. Yikes! I think I actually might have enough Red Fig tomatoes by the weekend to dry them, which would be cool. And again by the weekend, I may have enough paste tomatoes to do a batch of Slow-Roasted tomatoes, too.
Email Post
Labels: cool finds craigslist spinning wheel weaving

Unknown said…
Oh, my. Congratulations on the nice deal, and the beautiful spinning wheel! I have some extra fiber if you need some for learning on. :)
8:38 AM

Jennifer said…
Fiber is one thing I don't have--if you really have some extra, I'd love to practice with it!

Unknown said…
I'll send some fiber your way, then. Hmm...if you have extra seeds of that sunflower you posted the picture of, I wouldn't at all mind having some for next year. :)
10:28 AM

Kesh Hatzis said…
I'm looking for a used Leclerc Bergere loom if you want to sell one. Thanks,
Kesh
5:02 PM