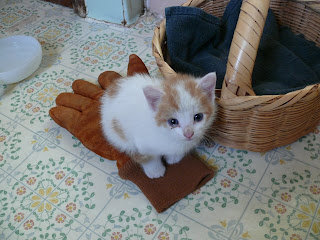 Just as I was about to start supper, my friend from work called and asked me for help.

Seems she was driving home on State Route 32, and she saw a kitten on the side of the road, just about ready to dash out into traffic.

I'm really not sure how she saw him; as you can see from his picture, he's a tiny, little girl-or-guy and he was frightened out of his wits, hissing and spitting and generally trying to pretend he was not freaked out.

(He/she purred for me, though. Finally. But he/she is still hissing.)

There were three kittens in all. Two other people stopped, and took one; my friend took one as well, but she can't have a cat with her nine dogs. So he/she is in my bathroom at the moment, curled as you see him/her, on my work glove. I had to wear those gloves to get him out of my friend's car.

I am sorry, but I have absolutely no sympathy for people who do this. Who would be so callous to just up and abandon three helpless kittens?! Who would be so cruel? This is a baby we're talking about here. Yes, a mouth to feed, but a baby. A kitten, damn it. A LIFE.