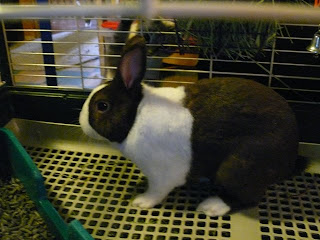 Now I really need to clean my house, because I have a 56 inch long rabbit cage in my entry room. Cocoa is here, and boy everyone is having a fit. I keep having to tell Mabel "That's our bunny!"

(I tell her the cats she sees outside are "our cats." The ones that aren't "our" cats I tell her "Those aren't our cats, Mabel" and she chases them. (Not very well, I might add.)

Lawrenceburg was today, and Dad and I went. We saw three spinning wheels, one broken (with extra wheel pieces, even) and two looms. I think there's a conspiracy somewhere in the universe; I never ever see looms anywhere, and them wham! One after the other after the other, etc.

I did buy the first one I saw; it's a project loom, of course. A two-harness table loom with a handy lever on the bottom to change the harnesses! How cool is that? It is partly oak and partly other woods, and more than likely homemade. It was also only $20, so that's not much money out of my pocket anyway. 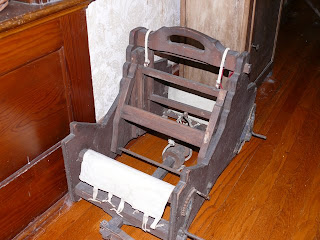 It is missing the reed and the top piece--and the heddles, of course, but that's an easy fix.

The other loom I saw was a Wunder-Weaver that they wanted $125 for--way too much, considering its condition, which was whole but rather rusty.

I do have to wonder if I'll start finding carving tools now that I'm getting into whittling. :)

And actually, I did find two tools; a gouge and a little bent knife thingy that should work pretty well once I sharpen them. They are both rather old, but in good shape, and I got them both for $5. 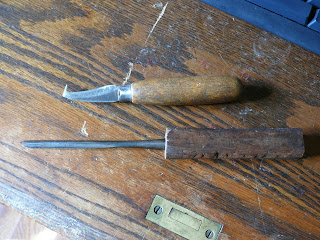 Not a very good picture, but you get the idea.

I did buy a "replacement" dough bowl for my big yellow bowl the cats cracked (and I don't really dare to use); it's smaller, but taller, and was made in Roseville, Ohio. That was only $12, so definitely a good buy. (It's white, too, and has a pretty pattern, so that works, too.)

And cast iron--I found another Wagner Ware griddle for $10, so I think I have plenty now, and I found a three-footed little dutch oven/bean pot with a rounded bottom for $14.50. Since I've been wanting a smaller dutch oven/something I can use for no-knead bread, this will be perfect. And it's cute, too!

I also found a Susan Bates Windmill Yarnwinder in its original box--it's all there, and evidently you hang it on a doorknob to use it. Very interesting! I paid $5 for it, and figured it might go well on ebay, but I can't find anything about them online. Weird! 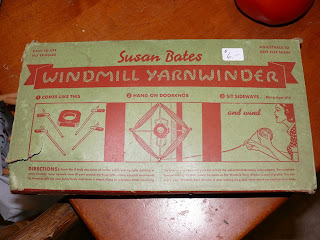 I'm surprised I can't find out anything, because this is a really good idea for someone who doesn't have the space!
Email Post
Labels: and my feet hurt antique shows bunnies lawrenceburg looms